FORECAST During Saturday afternoon through until Sunday morning an upper trough and east coast low is expected to bring areas of heavy rain and flash flooding to the South East Coast from Fraser Island SOUTH to Coolangatta including adjacent inland areas west the ranges. 24 hr totals to 100mm are likely with local falls to 250mm possible.

NPE highly recommended having an emergency plan in place which includes water pumping and back-up power considerations. NPE have hire pumps and hire generators in Brisbane ready for emergency hire and dispatch.

MODERATE TO HIGH RISKS INCLUDE: Heavy rainfall to 100mm is likely causing areas of flash flooding. Severe or VERY DANGEROUS thunderstorms with Very Heavy Rain to 250mm possible through the region leading to significant flash flooding. Severe weather with damaging winds to 100km hr likely along the coast and through elevated hinterland ranges. Dangerous and damaging surf conditions to 3m are likely from Double Island Point SOUTH to Coolangatta. Large swell to 5m possibly higher in open offshore waters. King Tides on both Saturday and Sunday nights are likely to cause local low lying inundation in flood prone areas. 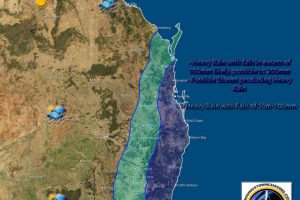 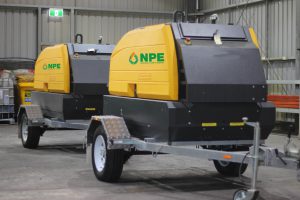 Scattered showers and light rain areas are forecast through the South East on Thursday increasing during Friday. Southern and Central inland regions are also forecast to receive widespread rain with storms during Friday before pushing East to the coast on Saturday. Those inland regions west of the ranges could see up to 50mm from the system. Its during Saturday conditions will deteriorate through the South East Coast as a forecast low pressure develops near Fraser Island before moving South during Saturday night into early Sunday morning.

Forecasting exactly where and when severe thunderstorms or dangerous storms may develop containing very heavy rain and flash flooding is difficult to pin point until they actually begin to occur. The entire region is at risk due to complex elements in the atmosphere, the main ones being wind direction and high moisture levels being fed in from the Pacific Ocean.