Take an abandoned zinc mine, a forward thinking new owner and National Pump & Energy and you have yourself a recipe for success.

Well, that was the case for New Century Resources (NCR) at the Century mine, located at Lawn Hill, 250km north-west of Mount Isa in the Lower Gulf of Carpentaria.

Just 3 years ago the mine was abandoned by MMG when zinc prices bottomed out. New Century were quick to pounce on the site in a deal that saw MMG pay New Century $46 million to take over the rehabilitation of the Lawn Hill mine site.

Wind the clock forward to today and NCR has just exported their first shipment of zinc to China and are well and truly on track to meet the scheduled 8 million tonnes a year by the end of the first quarter 2019.

So, how did they do it and what was the master stroke that lead to NCR turning the site from a money pit to a pit making money?

Step in National Pump & Energy (NPE) and a specialised process that has been refined and perfected by NPE known as hydraulic mining or hydromining. 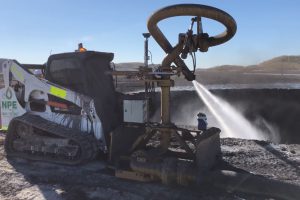 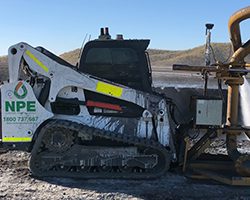 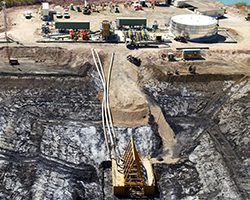 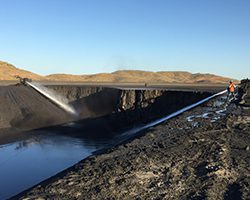 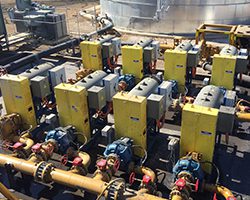 Hydraulic mining is an innovative process involving the use of extremely high pressure water cannons to recover once unwanted tailings and enable it to be re-processed through the plant for the valuable residual resources it contains.

The process involves the use of a range of highly specialised equipment that combines to break down the cemented tailings to create a slurry that is sent to the processing plant and then onto the port to be shipped around the world.

It all starts at an evaporation pond where the water winning pontoon pumps collect the water used for the hydromining on the tailings dam and pump it back to the area some 1.2km away.

Once the water is back at the hydromining site, it is then pumped via another series of pumps to the cannons working on the tailings dam.

It goes without saying that a system delivering a whopping 35 bar of pressure at the cannons has some pretty serious pumps behind it. Those serious pumps in this case are eight Metso pumps with 2,000kW motor capacity and producing 300 litres a second.

Out on the tailings dam is where the most impressive of the action occurs and it is carried out by expert operators and a remote controlled skid-steer with a front mounted hydro cannon.

Here the operators manoeuvre the machines to blast away at the concrete-like crust of the tailings deposits to turn it into a slurry consistency. This slurry is gravity fed to a pontoon housing 4 huge 240kW submersible slurry pumps which sends the tailings slurry on to a screen and hopper.

Once passing through the hopper, a series of Warman 12/10 belt driven pumps with 500kW mine spec motors drive the slurry along a 7km pipeline back to the process plant.

This kind of mine model is an exciting opportunity not just for closed mines, but for any operation that has the opportunity to re-mine their tailings.

Queensland Mines Minister Anthony Lynham said the NCR takeover of the abandoned mine site was an exciting new model of economic rehabilitation in dealing with mine sites that have concluded their original intended purpose. “It’s the ultimate recycling story,” Dr Lynham said.