Climbing the ladder with NPE

In the ten years Josh Riddell has invested in NPE, he’s proven his aptitude and climbed the ranks to land ...

In the ten years Josh Riddell has invested in NPE, he’s proven his aptitude and climbed the ranks to land the leading hand mechanical role at NPE’s Welshpool branch.
Josh said NPE had given him countless opportunities to grow personally and as a skilled tradesperson over the years.
“I’ve had a lot of great mentors who have always encouraged me and pushed me,” Josh said.
“The company has a great team that I enjoy being a part of.”

Maintenance Manager Graeme Reid said Josh started with NPE in 2011.
“Josh was with us for a few months as a trades assistant coming from a concreter background, so his initial role was in the yard washing, painting and anything else that was required to get our fleet out on hire,” Graeme said.
“From the very start you could tell Josh had a hunger and desire to succeed and progress within the company.”
“At only 20-21, when he first started what impressed me most was his willingness to get stuck in no matter the task which is a trait he still holds strong now.
“Because of this, when he asked to become a mature apprentice the decision was easy as I knew he would become a good tradesman and an asset to the company.
Josh undertook a mechanical apprenticeship, gaining experience in several key placements. One of which was Cummins who are a major diesel engine supplier for NPE.
Graeme said this allowed Josh to gain an in-depth understanding of NPE’s asset fleet requirements.

When Josh became a tradesman he quickly became one of the go-to guys on the shopfloor.
“Whenever a rush job came in because you knew you only had to give him the task and you could walk away knowing he would do everything physically possible to make sure that job hit the truck.”
Graeme said Josh had worked and run many successful jobs on site across mining, oil and gas, and had always kept his ambition.
“If Josh had his way – he would have been sitting either in my seat or further up the tree, that’s how hungry he is to succeed.
“I had to reign him in sometimes just for that reason as he needed to learn how to walk before he could run.
“To see where he has come from to where he is now is a credit to his work ethic and his drive.
Josh has been a credit to himself and his family, he should be very proud of his achievements and here’s hoping he gets to continue his growth within the company for many a year to come.” 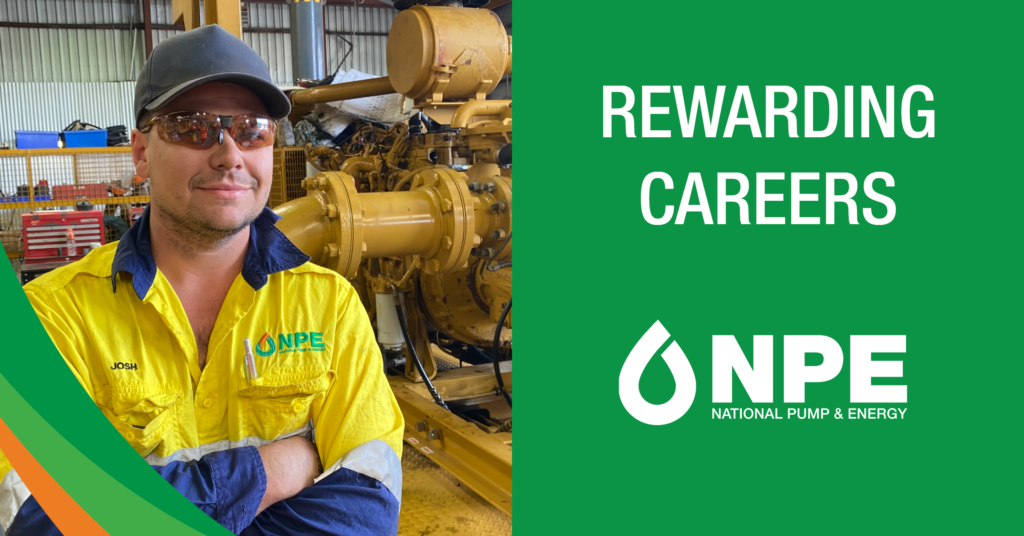 Follow NPE on LinkedIn and Facebook to be the first to hear about new opportunities at our Sunshine Coast, Brisbane, Sydney, Newcastle, Melbourne, Adelaide, Perth, Kalgoorlie, Darwin, Mackay and Mt Isa branches.

Current opportunities with NPE are shared at www.nationalpump.com.au/jobs/