NPE delivers efficient flood zone solution – in half the time

NPE was approached for a pumping solution to deliver efficient results under tight time frames and hold up in changing ...

NPE was approached for a pumping solution to deliver efficient results under tight time frames and hold up in changing flooding conditions.

The significant project at the Hydro Power site required pond levels to be reduced by 2m in less than 40mins to expose a section of the turbine site for scheduled upgrades.

With the site well within the flood zone – the solution needed to be fully mobile to remove from the site during regular flooding. It was also crucial that the setup was quick to commission and load out multiple times each week.  The site would flood each time the flood gates were opened, varying from twice to as many as 10 times each week – calling for a robust and agile solution.

“It was an obvious choice for the application with superior flow, silenced canopy and compact design that can be easily mounted on a dual axle trailer for agility,” Mr Grennan said.

“With the brief window we had to work in, the quick connection Bauer couplings on the NPE setup allow for fast demobilisation and quick removal from site.”

After thorough consultation with the client, the order confirmation was received and the units were dispatched to site five days later.

Mr Grennan said the area had been completely devastated by 2020 bushfires.

“And the recent heavy rains had caused numerous landslides in the area, making dispatch from NPE’s Sydney branch all the more treacherous,” Mr Grennan said. 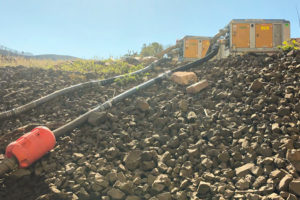 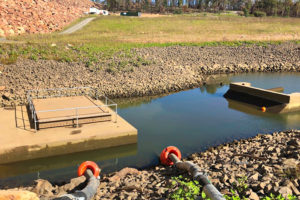 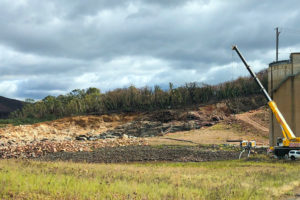 “Many roads were closed, leaving the winding mountain terrain as the only way in or out.”

The local NPE crew were up to the challenge.

Within ten days of the order confirmation – NPE commissioned and tested the units and were able to meet the job requirements to empty the pond to desired levels in less than 20mins.

Trust NPE to solve your onsite needs and deliver on your next project. Contact us today.