Be ready for the rain and talk to NPE about your sites pumping and power generation requirements early.

Many parts of Australia are facing flood warnings at the moment that have the potential to cause havoc on work sites and mine sites.

The current serious weather conditions and flood warnings that spread from the Pilbara in the West to North QLD in the East have the potential to drop large amounts of rain and cause flooding.

Be ready for the rain and talk to NPE about your sites pumping and power generation requirements early.

Western Australia Flood Warning Centre. Flooding may develop in the Pilbara District during the next few days due to heavy rainfall associated with a Tropical Low. A weak trough extends from the western Pilbara through the Kimberley. A Tropical Low is located to the north of the Pilbara coast. Heavy rainfall is forecast over the Pilbara for the next couple of days. 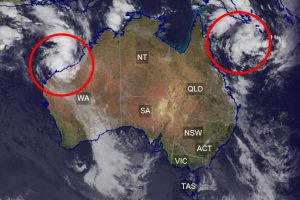 The Bureau of Meteorology’s Tropical Cyclone Outlook for the Coral Sea is set to be increased from a low to moderate chance of development on Saturday.

“While it may have been a slow start to the season, February and March are the peak months for tropical cyclone activity in the eastern region and Coral Sea with conditions becoming more favourable for development from Saturday onwards,” Mr Gunn said.

“It’s too early to speculate about the cyclone’s intensity, forecast path and where it will make landfall, however, we will get a clearer picture in the coming days.

“Communities in north Queensland should begin their preparations now, stay tuned for latest official forecasts and warnings from the bureau, and follow the advice of local emergency services.”